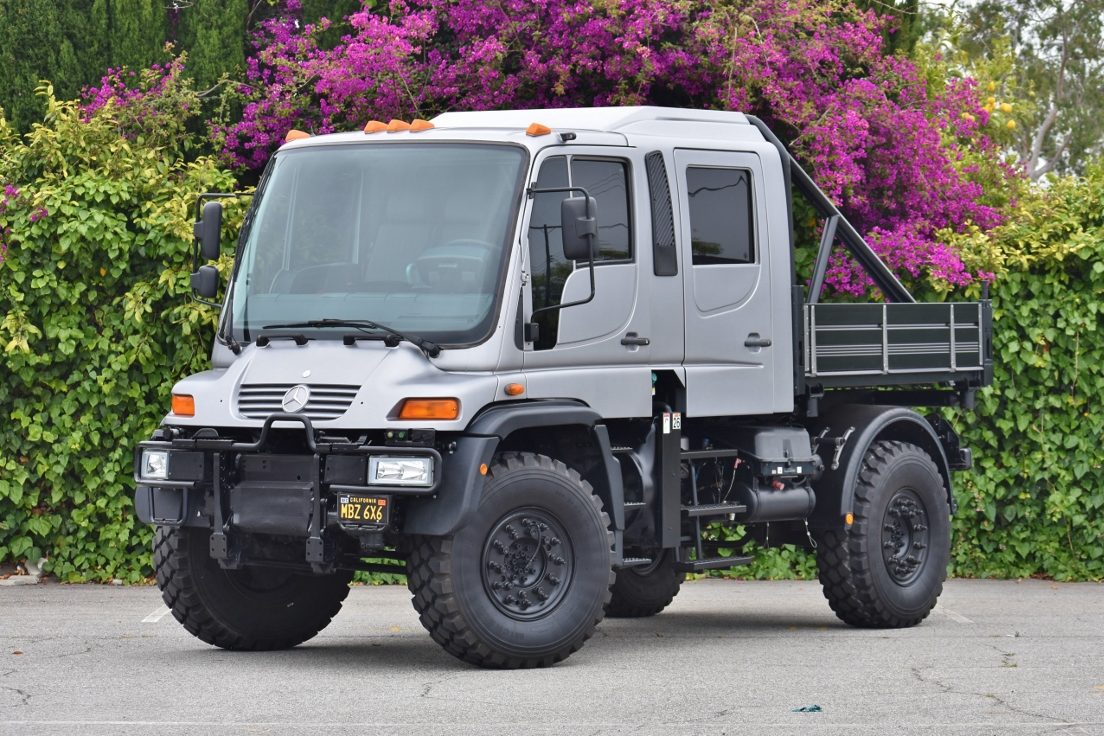 All of the details on the coolest Unimogs sold at auction from Los Angeles to Philadelphia.

Albert Friedrich Has An Idea
Following World War II, Germany's economy relied on the agriculture sector, which employed a significant portion of its population. The growth and harvesting of crops required labor-intensive work that proved to be an inefficient strategy and poor business model. To minimize manual labor and expedite the cultivation process, engineer Albert Friedrich of Daimler-Benz AG drafted plans for an all-purpose compact tractor. In 1945, Friedrich collaborated with his engineer associates Hans Zabel and Heinrich Rössler to begin the development of what would become the Unimog.

Designed as a multipurpose vehicle, the Unimog had numerous features that were integral to its enhanced functionality compared to a classical tractor. Key elements consisted of equal-sized wheels front and rear, a body-on-frame design, an all-wheel-drive system, power-takeoff shafts, portal axles, implement attachment points, and ample cargo storage space.

The Unimog Is Born
Officially unveiled in 1946, the prototype model featured a loading platform at the rear of the soft-top cab, rear-wheel drive, switchable front-wheel drive, and came equipped with a diesel engine mated to splitter gearbox. The vehicle name was born when engineer Hans Zabel wrote in his notes "Universal-Motor-Gerät," the German acronym for a universal piece of equipment, which would later be abbreviated to "Unimog." Large-scale production of the Unimog initially began in 1948 at Boehringer in Göppingen, Germany, where the first several hundred Unimogs were produced.

With the backing of Mercedes-Benz, Daimler-Benz took over manufacturing in 1951. Two years later, the Unimog would bear the iconic Mercedes-Benz three-pointed star on its grille.

Areas Of Service: Unimogs For Civilians, Military, And Motorsport
Owing to its extraordinary build quality, excellent ground clearance, and both extreme terrain and on-road driving capabilities, the Unimog's uses have been wide and varied. Unimogs are often customized for specialized uses, including forestry, plowing snow, hauling cargo, putting out fires, and farming, in addition to its military uses. The Unimog's wide versatility, especially in its early days, was due in part to the power takeoff connection (PTO) that allowed users to operate heavy rotary equipment, including stationary conveyor belts, brush mowers, water pumps, and snow blowers. While the Unimog was primarily used for civilian purposes, the Unimog's flexibility also made it a great fit for the military and, perhaps surprising to some, for motorsports.

If the Unimog's metamorphosis into a train, fire truck, emergency vehicle, farm tractor, construction truck, and more were not impressive enough, it added the role of armored military vehicle to its resume in 1960 with the introduction of the Unimog SH. Due to inadequate support, vehicle regulations, and unfavorable sales, the Unimog never officially entered the North American market, making it a stranger to our shores except where imported under gray-market rules.

In the motorsport arena, the do-it-all and fearless Unimog has competed in slow-moving truck obstacles, desert rallies, mud bogging, and won the Dakar Rally twice, in 1982 and 1986, book-ending a trio of wins from another awesome Mercedes-Benz super-truck, the 1936 AK.

Forbidden Fruit: Unimogs On The U.S. Auction Block
To commemorate the contributions of the almighty Mercedes-Benz Unimog, we've gathered a list of the most awesome Unimogs to ever be sold on Bring a Trailer.

The More You Know: Unimog Interesting Facts
There is a Unimog Museum in Gaggenau, Germany.
Boehringer (a former tool manufacturer) built the first 600 "70200" series Unimogs.
A pair of ox horns in the shape of the letter U was the original Unimog emblem.
The second oldest Unimog still in existence today is the 1948 Unimog U6.
Three different cab options were available for the traditional Unimog.
From 1948 to the present, nine different model series of the Unimog have been produced.
In 1963 the hydraulics system became standard.
The two series still in production today are the 437.4 and 405.
Due to vehicle regulations, among other factors, Unimogs are not common in North America.
Arnold Schwarzenegger once owned a 1977 Mercedes-Benz Unimog U1300 SE.
The Unimog 404 is the highest production model with 64,242 produced.
A total of 2,416 Unimog 419s were made and have only served in the U.S. military.
Independent dealers have imported most Mercedes-Benz Unimogs into North America.
Freightliner manufactured the UGN series Unimogs for the North American market.
In 1994, the "Funmog" concept was unveiled. Only 12 units of this Unimog were made. โดมิโน่ QQ

« Daimler Continues To Mull Future of May… โดมิโน่ QQ »
Profile