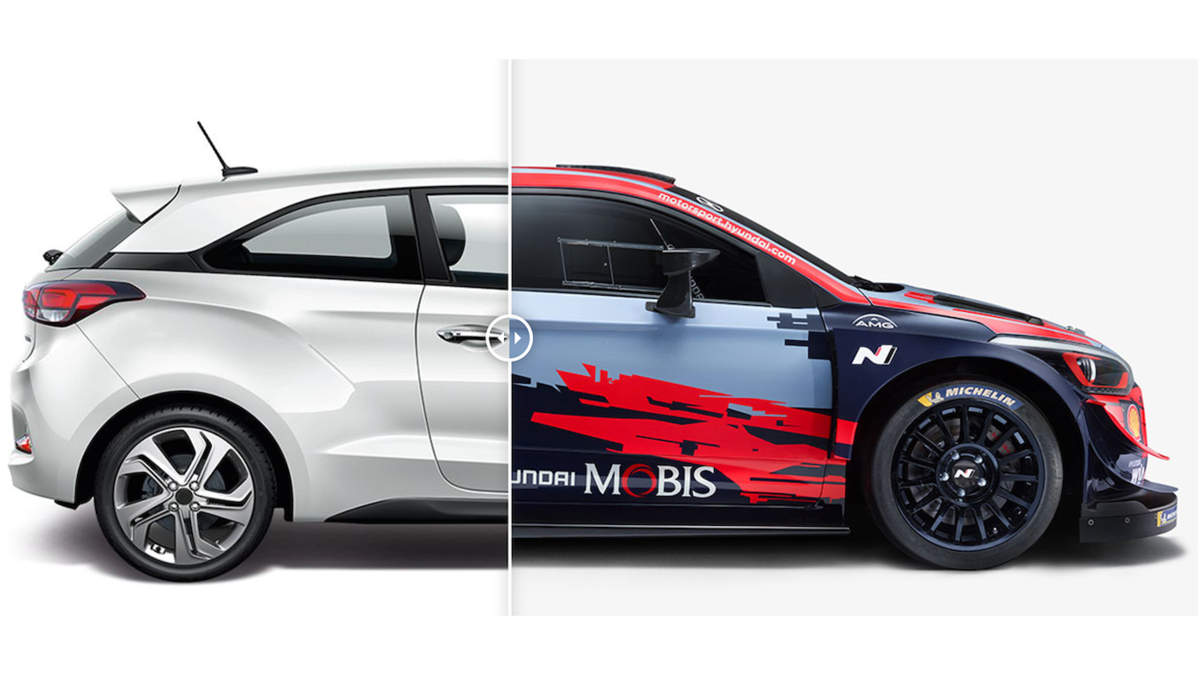 Dig deep and they’re the same. Admittedly, you do have to dig pretty deep – but Hyundai’s i20 World Rally Car draws its lineage from the very same i20 Coupe you pass on your daily commute. They come from the same production line.

That is, however, where the similarities end. Unless you count the fact they both have six gears, three doors and a wheel at each corner.

One hits 100kph in 10 seconds and offers air-conditioned comfort and cup holders. The other uses twice the number of driven wheels and three times the amount of power to get to the same speed in under four seconds.

What’s the difference? Let’s start from the bottom and work our way up.

The tyres the i20 WRC sits on are purpose made and changed every 80km. The suspension on last year’s world title-winning car is designed not only to soak up every bump and land every jump, but also to be subtle enough to keep the wheels (which are bigger on the rally car) in contact with the ground, thus enhancing grip and forward motion.
The suspension is adjustable in terms of rebound, while the car’s ride height can also be tweaked for particularly rough sections of road.

Beneath the car, there’s plenty of protection with steel plates running from front to back to protect the engine and transmission.

The steel shell is stripped of sound-deadening material and creature comforts such as door handles and window-winders. The plastic side windows have sliders, they don’t open, and a material loop pulls the door closed.

Selected steel panels are whipped out and replaced with carbon fibre, while a multi-point roll cage is welded in. Tailor-made seats are fitted for the driver and co-driver with fighter-plane-style harnesses pinning the crew in place.

Any kind of recognisable dashboard is gone for the likes of world champions Ott Tänak and Martin Järveoja. Instead, they get a single digital screen which scrolls through menus and lists detailing the car’s vital data in the way you or I scroll through Spotify. Ahead of the driver, there’s a smaller screen which changes between liaison sections and special stages.

In stage mode, the screen displays a number referring to the gear being used at that point, a gear-shift indicator which is a rising number of lights telling the driver when to change up to the next ratio. Road mode offers more mundane details like current speed and the time.

Back beneath the skin, a six-speed manual gearbox is replaced by a sequential six-speeder operated by a steering column-mounted paddle shift. The 380bhp is fired to the four wheels via mechanical front and rear differentials and a clever electro-hydraulic one in the middle.

The one-litre road engine is replaced by a bespoke 1600cc turbocharged direct injection unit which produces a sensational 450Nm torque at 5500rpm. Astonishingly, in terms of top speed, there’s probably not a huge difference between the two cars. The road version will nudge 190kph, which is about what the rally car will manage. The difference is, the rally car will cut corners at that speed too…

From the outside, the most obvious difference is the multitude of wings, dive planes and splitters sprouting from the i20 WRC. These come with both fashion and feature. They make the rally version look like the coolest car in the world, help keep the key components cool and provide serious levels of downforce to drill the car into the road and hike cornering-speeds to eye-watering levels.

But still, only one of the two offers you a sensible place to stick your double-shot latte! ผลบอลvip